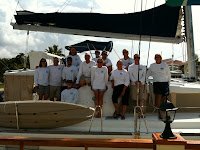 The swims of Penny Palfrey was among the 15 selected nominees for the 2012 World Open Water Swimming Performance of the Year.

"The mere mention of the name Penny Palfrey in the open water swimming world elicits immediate respect and awe. Whether she dramatically succeeds or is involuntarily pulled from the water, Palfrey is a true adventurer in the classic sense.

She searches for improbable and seemingly impossible courses, and then melds her body and mind to achieve her goals. The 50-year-old underwent an outrageously demanding training schedule that would flat-out exhaust world-class athletes half her age. Palfrey attempted the most difficult hot-cold water double marathon swim in history. She got nearly 80 miles under tropical heat, while stung from head to toe with venomous jellyfish, in her Florida Straits swim between Cuba and Florida. Then less than 2 months later, swam nearly 12 hours into her North Channel attempt between Scotland and Ireland before she was involuntarily pulled due to hypothermia. These swims were not defined as failures; they were audacious attempts that demonstrated her remarkable physical tools and unworldly mental strengths. For her unique view of the Earth as a marathon swimming oasis, for her aquatic adventures of unprecedented difficulty, for her ability to organize and attempt swims around the globe, Penny Palfrey's back-to-back marathon swims are a worthy nominee for the 2012 WOWSA Open Water Swimming Performance of the Year."

The nominations are meant to recognize and honor some of the best efforts and swims that the global open water swimming world has seen. Reducing the number of nominees to 15 was extraordinarily difficult due to the incredible efforts and exploits of thousands of women in the sport. Extreme swimmers, disabled swimmers, ice swimmers, marathon swimmers, professional swimmers, coaches, administrators, pilots and swimmers from all walks of life thoroughly impressed their peers, the public and the media with their open water swimming exploits throughout 2012.

Palfrey is one of the world's most adventurous and accomplished marathon swimmers, specializing in channel swims around the world. She is a mother of three, a grandmother of one, and a 2010 inductee as an Honour Swimmer in the International Marathon Swimming Hall of Fame. The member of the 24-hour club is originally from England with dual citizenship of Australia.

Formerly a world-class pool swimmer, Palfrey has reached her stride in channel swimming as she has set records in the Strait of Gibraltar, Molokai Channel (12 hours 7 minutes) and Santa Barbara Channel as well as completed swims in the Cook Strait, English Channel, Catalina Channel, Tsugaru Channel, and Molokai Channel. She has completed 6 out of the 7 channels of the Oceans Seven and various other swims including Lake Taupo in Australia and the Cayman Brac Channel in the Caribbean Sea. She also attempted a 168-kilometer swim from Cuba to Florida across the Florida Strait, an even greater distance than her successful 67-mile Bridging The Cayman Islands swim.