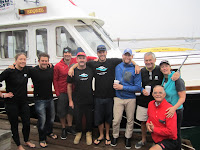 The Night Train Swimmers' SF to SB Relay was among the 15 selected nominees for the 2012 World Open Water Swimming Performance of the Year.

Their nomination from the World Open Water Swimming Association reads,

"The Night Train Swimmers not only raised a mind-boggling US$1.2 million (and counting for Semper Fi) in its non-stop 339-mile (546 km) charity swim attempt down the California coast from San Francisco to Santa Barbara, but they also endured 6 days of non-stop swimming through endless blooms of venomous jellyfish and water than never got above 14°C. Hour after hour, day after day, the six swimmers - Phil Cutti, Patti Bauernfeind, Dave Holsher, Joseph Locke, Kim Chambers and Zack Jirkovsky - battled the elements under the watchful eye of Captain Vito Bialla. They followed channel swimming rules, always mindful that their temporary discomforts were helping injured soldiers whose lifetimes are filled with discomfort. Although Mother Nature won this skirmish when the hardened group of intrepid adventurers was stopped after 109 hours by endless blooms of venomous jellyfish, the victory was ultimately theirs. For the audacity of their vision, for their charitable efforts on behalf of men and women in uniform, for the US$1.2 million raised, the indomitable Night Train Swimmers are worthy nominees for the 2012 WOWSA Open Water Swimming Performance of the Year.."

The nominations are meant to recognize and honor some of the best efforts and swims that the global open water swimming world has seen. Reducing the number of nominees to 15 was extraordinarily difficult due to the incredible efforts and exploits of thousands of women in the sport. Extreme swimmers, disabled swimmers, ice swimmers, marathon swimmers, professional swimmers, administrators, coaches, pilots, and swimmers from all walks of life thoroughly impressed their peers, the public and the media with their open water swimming exploits throughout 2012.

The Night Train Swimmers is a group of San Francisco Bay Area-based extreme open water swimmers who work together to improve the lives of people around the world by raising money for various non-profit organizations. This all-volunteer organization was founded in 2008 with a five-person relay crossing of the English Channel. It has since grown in membership and impact each year since with marathon relay swims in the Sea of Cortez in Mexico, Lake Powell bordering the states of Arizona and to the Farallon Islands off the coast of San Francisco.

The Lifehouse Foundation was the first recipient of Night Train Swimmers' support of people with developmental disabilities. Later, the Night Train Swimmers completed a relay swim from Sacramento to Tiburon to raise money for the Reed School Foundation, supporting their local public school district. The following year, the team stepped up to raise money for Wounded Warrior Project.