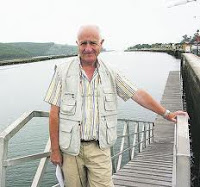 The work of Juan Ignacio Martínez Fernández-Villamil, also known as his nickname Moreno, was among the 15 selected nominees for the 2012 World Open Water Swimming Performance of the Year.

The World Open Water Swimming Performance of the Year is meant to honor efforts and swims - successful or not, short or long - that (1) best embody the spirit of open water swimming, (2) are representative of the sense of adventure, tenacity and perseverance that open water swimmers are known for, and (3) have most positively influenced the world of open water swimming.

"For 55 years, the Descenso a Nado Ría de Navia has captured the hearts and minds of the small town of Navia in northern Spain. For 55 of the 55 years, Juan Ignacio Martínez Fernández-Villamil or Moreno for short has been the heart and soul of the Descenso. The dances and the drama, the pageantry and the parades, the races and the revelry of the race are intimately ingrained in a truly magical week of non-stop activities. This priority on the athletes, this melding of culture and competition only comes about by a larger-than-life personality who places open water swimming at the center of his life’s work day in and day out, year in and year out. For his ability to inspire the community and sponsors, for his ability to weave the traditions of northern Spain so magnificently to a swim down a river, for his efforts to place smiles on swimmers of all generations for days on end, for his 24/7 availability to create a most picturesque event where swimmers are all placed on the top podium of priority, the year-round efforts of Juan Ignacio Martínez Fernández-Villamil are a worthy nominee for the 2012 WOWSA Open Water Swimming Performance of the Year."

The nominations are meant to recognize and honor some of the best efforts and swims that the global open water swimming world has seen. Reducing the number of nominees to 15 was extraordinarily difficult due to the incredible efforts and exploits of thousands of men and women in the sport. Extreme swimmers, disabled swimmers, ice swimmers, marathon swimmers, professional swimmers, administrators, coaches, pilots and swimmers from all walks of life thoroughly impressed their peers, the public and the media with their open water swimming exploits throughout 2012.