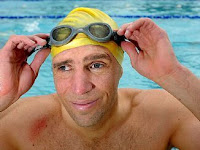 James Pittar was among the 15 selected nominees for the 2012 World Open Water Swimming Performance of the Year.

The World Open Water Swimming Performance of the Year is meant to honor an effort or a swim - successful or not, short or long - that (1) best embody the spirit of open water swimming, (2) are representative of the sense of adventure, tenacity and perseverance that open water swimmers are known for, and (3) have most positively influenced the world of open water swimming.

"What you believe, you can achieve. Your dreams are deep within you; you feel it in your heart, you visualize it in your mind. James Pittar cannot see but he certainly envisions his marathon swimming goals – and all the good that comes from his sims. The International Marathon Swimming Hall of Fame Honour Swimmer suffers from impaired vision, but that has not slowed him in dreaming and achieving all kinds of successes in the open water. His 12 km Shelley Beach Swim was another achievement in his impressively prolific body of work in the water and on land. Many swimmers have their favorite charities but Pittar's lack of vision makes his charity swims on behalf of The Fred Hollows Foundation especially fitting. For his ability to envision and execute success, for his stature as a role model for visually impaired athletes, for his ability to help raise funds, James Pittar's Shelley Beach Swim is a worthy nominee for the 2012 WOWSA Open Water Swimming Performance of the Year.."

The nominations are meant to recognize and honor some of the best swims that the global open water swimming world offers. Reducing the number of nominees to 15 was extraordinarily difficult due to the incredible efforts and exploits of thousands of women in the sport. Extreme swimmers, disabled swimmers, ice swimmers, marathon swimmers, professional swimmers, coaches, administrators, pilots, and swimmers from all walks of life thoroughly impressed their peers, the public and the media with their open water swimming exploits throughout 2012.

Pittar was inducted in the International Marathon Swimming Hall of Fame as an Honour Swimmer in 2009. The swimmer from Sydney, Australia become the first blind swimmer to complete the Triple Crown of Open Water Swimming. He is also one of the leading swimmers in the Oceans Seven challenge. He swims on behalf of the Fred Hollows Foundation and works for the Rainbow Club Foundation which teaches disabled kids how to swim.

Claire Daniel wrote a book, Swimming the Continents about Pittar's aquatic exploits in the oceans, rivers and lakes around the world. He was also the subject of the documentary, Swimming with Skyscrapers.

Pittar suffers from a genetic disorder called Retinitis Pigmentosa, which causes a degeneration of the retina. This disease was diagnosed when he was 16 after he suffered from rapidly decreasing vision. He was legally blind by 21 and completely blind by his early 30's. Despite that handicap, Pittar has successfully swum the English Channel, Catalina Channel and Manhattan Island Marathon Swim. He also completed 21 km swim in Phuket, Thailand, an 11 km swim in Anzac Cove, Turkey, a 25 km swim in the Vaal River in South Africa, a 60 km swim down the Parana River in Argentina, a swim across the Cook Strait in New Zealand, a 19 km swim across the Rottnest Channel in western Australia and a successful two-way crossing of the Strait of Gibraltar, and the Shelley Beach Swim.