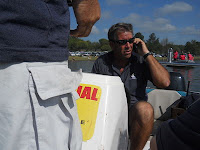 Wayne Riddin of South Africa was among the 15 selected nominees for the 2012 World Open Water Swimming Man of the Year that were announced today.

"Imagine 18,000 open water swimmers gathering in one location to compete in a variety of amateur, charity, disabled and elite competitions, in a country where there are only 6,000 competitive swimmers. This is the environment that Wayne Riddin and his team have created in Pietermaritzburg, South Africa. The Midmar Mile is the world’s most exciting open water swimming series of events. From timing systems and buoy placement, from online social media interaction to celebrities, from Special Olympics to professional athletes, the Midmar Mile has it all. Its 12 seeding events, its hot spots, its Facebook strategy, its royalty, its aerial coverage, its biathlons, its family teams, its car give-away: there is so much Riddin has created to develop the most extravagant, innovative, comprehensive open water swimming event in the world. For his innovation and aquapreneurial drive, for his commitment to give back to the sport of swimming, for his leadership to create a wholesome community of open water swimmers, Wayne Riddin is a worthy nominee for the 2012 WOWSA Open Water Swimming Man of the Year."

Ridden is a coach, administrator and the race director of the aQuellé Midmar Mile in South Africa, the world's largest competitive open water swim that attracts nearly 20,000 swimmers of all ages and abilities every year to the Midmar Dam in Kwazulu Natal. A former winner of the aQuellé Midmar Mile himself, Ridden has led the operations to a level unprecedented in the open water swimming world. He also serves on the board of directors of the International Marathon Swimming Hall of Fame where he is the Africa Co-Vice President.