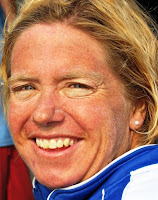 Tina Neill was among the 15 selected nominees for the 2012 World Open Water Swimming Woman of the Year that were announced today.

"Look at Tina Neill and nothing hints at records. Talk to Tina Neill and nothing she says hints of greatness. But the introverted, humble explorer of the raw potential of the human spirit has been making waves in the open water throughout her career. In her own quiet way, Neill loudly proved once again how uniquely special she is. She hit the lumpy water at night, battled the elements far from shore, and finished the next night, completing an unprecedented 28 hour 41 minute crossing of the 52-mile (83.6 km) San Clemente Channel. Like her record-setting backstroke swims in the England and Catalina Channels, she efficiently funneled her talents and enthralled her crew with her strength, stamina and speed. For her quiet nature despite swims that scream volumes, for always remaining under the radar despite record-setting exploits, for the pure genius of her aquatic talents in completing 4 marathon swims during 2012, Tina Neill is a worthy nominee for the 2012 WOWSA Open Water Swimming Woman of the Year." 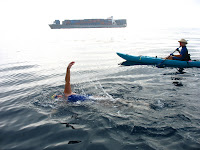 In 2012, she crossed the 17-mile (27.3 km) Kaulakahi Channel in Hawaii and the 28.5-mile (45.8 km) Manhattan Island Marathon Swim in 2012 as well as becoming the first person to complete a swim between San Clemente Island and the California mainland with a 28 hour 41 minute effort over the 52-mile (83.6 km) course in September 2012. She was also a member of the six-member HTC Relay team with Forrest Nelson, Emily Evans, Steve Lowe, Kent Nicholas, and Mike Mitchell that set a new course record of 25 hours 48 minutes from San Clemente Island, around the western edge of Catalina Island, to the Southern California mainland at Cabrillo Beach in 2012.