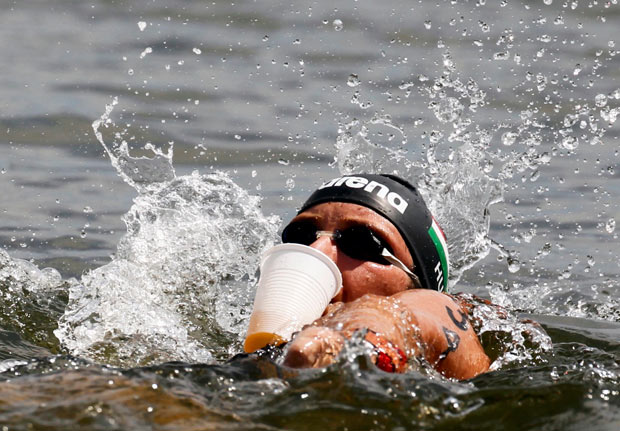 Risztov Éva was among the 15 selected nominees for the 2012 World Open Water Swimming Woman of the Year that were announced today.

"Risztov Éva’s versatility as an individual medley swimmer proved valuable as she shifted gears from being a world-class pool swimmer to an Olympic champion. In pulling off arguably the greatest upset of the 2012 London Olympic Games, Risztov gambled on a high-risk strategy that she executed to perfection and earned her long sought after gold by the slimmest of margins. Fourth at the 2004 Athens Olympics in the 400m individual medley, Risztov retired in 2005, feeling unfulfilled. But her hunger for an Olympic medal never waned and she returned as an open water swimmer in 2009. She didn’t immediately rocket to stardom. Rather, she paid her dues and learned along the way: getting bumped, beaten and red-carded. With a steely resolve and abundant confidence in London, she mimicked the favorite's winning strategy by going out fast, avoiding the physicality in the front, and facing down her rivals. For her long-held belief in her gold medal potential, for her humble willingness to shift disciplines, and for her risk-taking plan that turned the tables on the fast marathon swimming field in history, Risztov’s Éva is a worthy nominee for the 2012 WOWSA Open Water Swimming Woman of the Year."

She remains in training and looks to continue to open water swimming career.