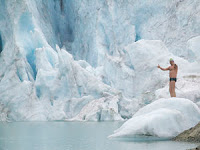 "The world according to Ram is expansive and empowering. His refreshing view of human potential is without limitation. His enlightening perspective effectively utilizes the power of the mind, and extends the world of open water swimming beyond contemporary comprehension. The founder of the International Ice Swimming Association inspires swimmers to look at water in an entirely new light; temperature no longer becomes the limiting factor. If the ice has melted, Barkai considers it a potential field of play. At the same time, Barkai understands the risk of extreme swimming. He counsels individuals to proceed with mindful caution and utilizes intelligent planning. The physiological data that he compiles and analyzes, the swims that he organizes, the risks that he manages and identifies are extraordinarily useful to the open water swimming world. For his encouragement of thinking outside the norm, for his properly-managed extreme swims, for his support of ice swimmers around the world, Ram Barkai is a worthy nominee for the 2012 WOWSA Open Water Swimming Man of the Year."

Barkai is a renowned cold water extreme swimmer who holds several records including the title of the most southernly open water swim ever performed when he swam in Antarctica. He also swam in mid-winter in Lake Zurich, Switzerland and organized the Patagonia Extreme Cold Water Challenge in the Patagonia region in South America where he was among the first individuals to successfully swim around Cape Horn, at the tip of South America.

Ram also organized the Cadiz Freedom Swim, the Speedo Ice Swim Africa and the 2012 Ice Swim Africa. He is the founder of the International Ice Swimming Association.

He has inspired people through his extreme swims and extraordinarily positive view of life and its challenges. He has done ice swims with Anne Marie Ward and Nuala Moore in Ireland, with Gavin Pike in Scotland, and with Andrew Chin, Ryan Stramrood, Toks Viviers, Kieron Palframan and Andrew Chin in Chile and Argentina. He will appear on Stan Lee's Superhumans television series for this ability to swim without a wetsuit or neoprene cap at lethally cold water temperatures. In 2012, Barkai completed a 1.3 km swim in an ice-bound lake in Jondal, Norway water temperature of 0.2˚C at 1000m above sea level. The swim is part of a new series on Discovery HD, which will air in 200 locations towards the end of this year.