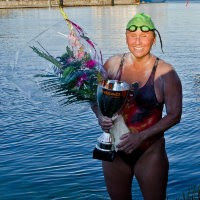 Anna-Carin Nordin was among the 15 selected nominees for the 2012 World Open Water Swimming Woman of the Year that were announced today.

"Quietly, diligently, and by herself, Anna-Carin Nordin travels the world in pursuit of the Oceans Seven. Neither the fastest nor the first, Nordin nevertheless pushes forward on her quest to cross the 7 major channels of the world. Without demands or an entourage, Nordin bounds from one channel to another, from one continent to another with a courage encased in a veneer of genuine sweetness. In addition to an ice swim and other swims in her native Sweden, she has completed the Strait of Gibraltar, Catalina Channel and Tsugaru Channel in 2012 and is within two channels of the Oceans Seven. For her unpretentious road to the highest echelon of channel swimming, for her introverted, methodical approach to achieve her goals, for her heartfelt appreciation of everything and everyone involved in the sport, Anna-Carin Nordin is a worthy nominee for the 2012 WOWSA Open Water Swimming Woman of the Year."

Nordin started to swim as a 6-year-old in Lidingö, a suburb of Stockholm in Sweden. A pool swimmer until 1985, she started swimming Long races: Riddarfjärden in Stockholm, Vansbrosimningen, Göta Kanal simmet and other shorter races. In 1997, after her son was born, she swam her first Nordic Masters Championships and the European Masters in Prague.