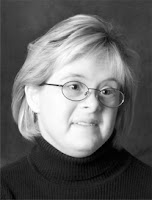 Karen Gaffney was among the 15 selected nominees for the 2012 World Open Water Swimming Woman of the Year that were announced today.

"Karen Gaffney is a champion in every sense of the word: a humble heroine, a remarkable role model, a spectacular speaker. The English Channel relay swimmer has dedicated herself and the tools at her disposal to champion a journey to full inclusion in families, schools, communities and the workplace for people with Down syndrome or other developmental disabilities. With dramatic open water swims to emphasize one’s potential, as well as her speeches, video tapes and resource materials, she constantly installs hope for others with Down syndrome. Her lifestyle proves a full productive and inclusive life is in store for parents and families of a child born with Down syndrome or other learning disabilities. For her swims across Lake Champlain, Lake Tahoe, in Hawaii and in San Francisco Bay, for her ability to heighten awareness and raise expectations of students, counselors, educators and those in the medical profession of the capabilities of children with Down syndrome to learn, grow and contribute in an inclusive setting, Karen Gaffey is a worthy nominee for the 2012 WOWSA Open Water Swimming Woman of the Year."

Gaffney is an open water swimmer who has swam nine miles across Lake Tahoe, swum in the Maui Channel, and was part of an English Channel relay team. She was born with Down syndrome, and has also graduated from college and is a passionate advocate for others via the Karen Gaffney Foundation.

She starred in Crossing Tahoe: A Swimmer’s Dream, an award-winning documentary by Blueberry Shoes Production, has been featured at the Sprout Film Festival. She was also featured in Imagine the Possibilities, a Telly Award winning production that tells her story of crossing the English Channel.

As a high school student, Gaffney founded the Karen Gaffney Foundation, a non-profit organization that encourages inclusion for those with Down syndrome, and started The Friends First Network in Portland, Oregon schools to promote diversity awareness. The Karen Gaffney Foundation is entirely funded by honorariums Gaffney receives for her speaking engagements, video sales, contributions from others and grants.