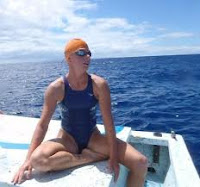 Grace van der Byl was among the 15 selected nominees for the 2012 World Open Water Swimming Woman of the Year that were announced today.

"Graceful, powerful, relentless is how Grace van der Byl is seen as she demonstrated her world-class speed from coast to coast while setting 8 different records in America throughout 2012. She was one of two individuals to finish all 7 stage swims of the 8 Bridges Hudson River Swim, the longest competitive open water swim in the world where she set a record in each stage of the 193 km 8-day race. She followed up her victory in the Hudson River with several stints as an observer for other channel swimmers, and ended her summer season with a record crossing the Catalina Channel in 7 hours 27 minutes. A swimmer since the age of 2, her love of the sport has endured endless hours of tough love and tough training in both the pool and ocean. For her speed that never seems to falter, for her willingness to readily volunteer for other channel swimmers, for her passionate love of the sport that never wavers despite cold and currents, Grace van der Byl is a worthy nominee for the 2012 WOWSA Open Water Swimming Woman of the Year."

Grace is a world-class open water swimmer who set the record for the Catalina Channel from Catalina Island to the California mainland in 7 hours 27 minutes. She is also a very active Observer for the Catalina Channel Swimming Federation and was one of only two individuals to finish all 7 stage swims of the 8 Bridges Hudson River Swim, the longest competitive open water swim in the world.

She is a swimming ambassador with several local and national television appearances and enjoys investing in kids to develop the sport of open water swimming for a new generation as well as supporting numerous channel attempts.